Fr. Bill Shea, SVD has been a missionary to missionaries.

In the 56 years since his ordination, Fr. Bill has worked as an educator, formator and spiritual director, as well as an administrator at the highest levels of the SVD in North America.

Through his work at seminaries across the United States, Fr. Bill has provided guidance and support for thousands of young men who sought life as Divine Word Missionaries and those who seek to serve the Catholic church in other ways.

Today, his legacy shines brightly in the work of each person who he influenced and inspired throughout the years. 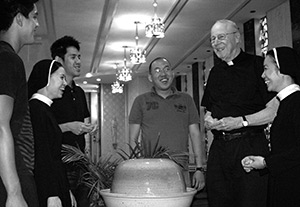 During almost 60 years of service to the Church and the Society of the Divine Word, Fr. Bill has touched many lives as a priest, religious superior, teacher, spiritual director, mentor, tutor, pro-life advocate, coach and friend.

The Rev. William Shea, SVD Scholarship is an endowed fund, established in honor of Fr. Bill, and aims to provide financial support to students in need of assistance for their undergraduate, cross-cultural, or language studies at Divine Word College, Epworth, Iowa.

The Scholarship is made possible through the generosity and support of people like you.

Our celebration of Fr. Bill is postponed until a later date. Please check back for the new date.

We continue to accept gifts fund the scholarship. Scroll down for a donation form!

Thank you for your support. 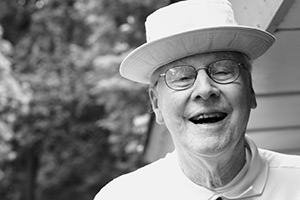 “It’s been wonderful being a priest. I like the work being an educator, formator and administrator and fulfilling the needs of the Society. I thank God and I would not want to trade place with anyone.”

Please join us in extending this legacy of God’s love and grace to many more generations of students by pledging a monetary gift to the Rev. William Shea, SVD, Scholarship.