The last time Roger was with his family was 2013. He missed being home for Christmas this year for the fourth year in a row.

His mom and dad, two sisters and four brothers live in or near his home village. Roger’s parents are farmers – they grow rice and corn, also garlic and other vegetables. They sell the rice and garlic at market or, if they have a good crop, to a larger company.

Roger is used to being away from home, just not this far. He went to a local parish Catholic boarding school when he was 14, which is common in Myanmar. The school was about a 30-minute walk from his village, but he only went home once a month at most.

As he was growing up, his parents would ask him what he wanted to be when he was older. He thought he would like to be a doctor. His parents asked him to think about being a priest, but he didn’t give it much thought until he was in boarding school.

There, he was inspired by the pastor and began thinking about being a priest, but he was afraid to discuss this with the pastor. Then one day, the pastor asked Roger if he would be interested in attending the seminary high school. Roger was thrilled the pastor asked and he said yes.

At the seminary, Roger again was home only once a month at most, it was a two-hour bicycle ride, which is how he usually traveled.

Roger studied two years at the high school and four years in college in Myanmar. He was a good student and good at speaking English, which is why his bishop asked him if he would be interested in studying at Divine Word College. After a couple of weeks thinking about it and talking with his parents, he decided to give it a try. His parents didn’t have much education, so it was their dream for their children to have as much education as possible.

Roger has been a student at DWC since August of 2014. He said, "It’s been a wonderful experience and a great blessing to be a student here." He will attend the Divine Word Novitiate beginning in Fall 2018, but still may not be able to visit his family because of VISA restrictions.

Thanks to the internet, he is able to keep in touch with his family every few weeks.

Roger wants to be a priest because he wants to “do something meaningful with my life. I have received so many things in my life, I want to share with others.”

Your monthly gifts will help Roger achieve his dream!

If you wish to have your monthly gift automatically deducted from a bank account or credit card, we suggest a $5 per month minimum gift. Please complete the EFT authorization form to get started. 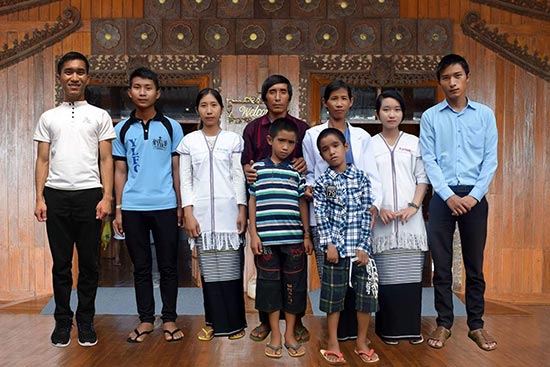