Dr. Richard Mani -- The Society of the Divine Word instilled gifts that have lasted a lifetime

A pioneer of medical procedures now accepted as commonplace, Dr. Richard  Mani spent six of his early years in SVD education and formation. Now retired, he is devoted to his faith—he spends an hour each day before the Blessed Sacrament— while supporting Catholic schools, the SVD and Divine Word College.

“Besides the influence of my parents, everything that I am in many ways, I owe the Society of the Divine Word,” he said. “It has instilled in me gifts that have lasted a lifetime.”

Mani was born in 1930 near Pittsburgh, the eldest son of faith-filled and generous Italian immigrant parents, whose talents always kept them employed during the depression.

In 1944, he entered the minor seminary at Girard, Pennsylvania and, except for one year, continued with the SVD until the “juniorate” at Epworth, where in 1951, he decided on a secular life. But during those years, the SVD revealed to him the spiritual gifts of the Holy Spirit, the Blessed Sacrament, the liturgy and Our Lord Jesus. He learned how to appreciate the beauty of classical music and the arts. He also learned how to deal with daunting academic challenges—lessons that served him well in medical school.

He went on to specialize in diagnostic radiology and serve six years in the U.S. Army Medical Corps. In 1966, he earned a fellowship at the University of California San Francisco in the budding field of neuroradiology where he helped pioneer procedures like angiograms and angioplasty. Retiring in 2004, he now creates religious mosaics in glass, ceramics and marble, 280 of which are in classrooms of San Francisco area Catholic schools. Two are at Divine Word College.

In these and many other ways, Mani is giving back with a generosity whose roots stretch back 60 years.

“The example that was set by the priests, brothers and nuns that I had contact with was of constant giving,” he said. “You can’t spend time with people who do nothing but give and not have it influence you.” 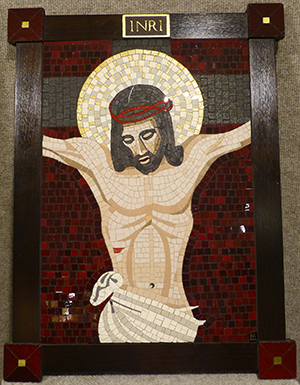 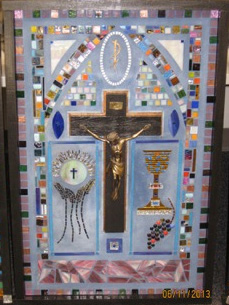 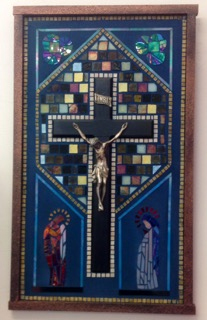 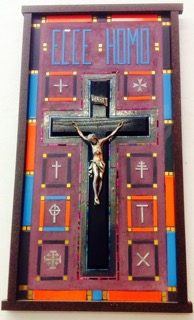 Other mosaics by Dr. Richard Mani that he has gifted to Catholic schools in California.
Loading Conversation